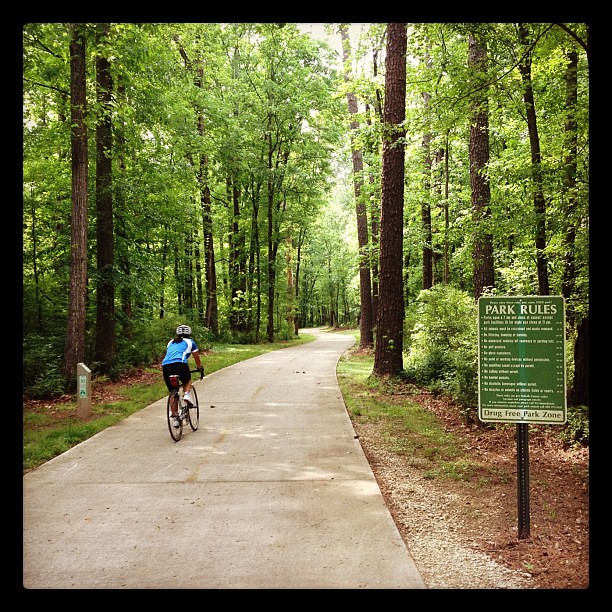 My partner, George Chidi, is running for the DeKalb County Commission, to represent the "super-district" 7 which comprises the eastern half of the county and runs all the way from Doraville down through Tucker, Stone Mountain, Lithonia, and to the area of south DeKalb between Arabia Mountain National Heritage Area and Panola Mountain State Park, which is where we were today.  It's beautiful there, with a hiking/biking trail that stretches from the south end of Arabia Mountain and passes Stonecrest Mall on its way to Lithonia proper, the kind of woodsy suburbia typical of Atlanta, built up with comfortable subdivisions interspersed with older homes. It's an easy 25 minute commute to downtown via I-20. I had work to do for my teaching job, so I left him to it and went in search of a coffee shop where I could set up my laptop and put in some caffeine-fueled productivity. I've done this several times on other days in other parts of the county.

I couldn't find one.

Eventually, I located a Panera, which was almost but not quite...they have coffee and wifi, but they are really a volume restaurant business, so they do not encourage people to linger that long.  Translated into practical terms, they don't have wall outlets so the limit of your battery is the limit of your stay.  Mine, alas, was dead, so I didn't get much done.

I thought to myself, "How does this place not have a Starbucks?"  Apparently that's a common question.  It may seem like a trivial one, but...having an "office with coffee" is both a marker of and an impetus to economic as well as social activity.  People have meetings.  They work.  They have random encounters and conversations.  There was plenty of that going on in Panera, to be sure, but...that's it?

Understand, the area around Stonecrest and Lithonia is pretty resolutely middle class, both in appearance and demographics, and also typical of similar areas in the county; imagine the small-town vibe and easy highway access of Tucker, with the greenway and park placement of Stone Mountain.  It's a little more spread out...but for many of us, that's a feature not a bug.

It's also weirdly economically depressed.  Boarded up houses, abandoned commercial buildings.  What ought to be prime real estate along the greenway doesn't seem to be as valued as it would be elsewhere in the area.  Real estate values have bounced back from the crash in 2008 and then some elsewhere...in south DeKalb, not so much.   What's going on here?

The residents have noticed, and complained, and mostly been ignored. The prevailing theory in some quarters is that Those People In North DeKalb (ie, white people) are keeping all the goodies to themselves.  This idea has driven much of the animus between the north and south ends of the county, and the political deadlock, for some time now.  It is a fact that the most significant difference between Tucker and Lithonia, which are otherwise pretty much mirror images of each other, is racial makeup.  People can be excused for being suspicious.  I'm pretty much on board with the idea that if it looks like a duck and quacks like a duck, it's probably a racist duck.  I just don't think the residents of north DeKalb are the source of the problem. It doesn't make logical sense from a sheer, bloody-minded, self-interested perspective:  more economic development in south DeKalb means higher property values which means more tax revenue which means everyone's taxes go down.  Everybody wins!  There may indeed be someone who is profiting off of limiting opportunities for south DeKalb, but it's not the average resident in the rest of the county.  They are also getting screwed, if more indirectly.

Well, and what to do?  I don't know; but driving around I also noticed that the roads were (like the rest of the county, and perhaps more so) not in good shape.  I have heard two things from my ringside seat at many a wonktastic discussion of local politics:  that businesses base placement decisions partially on traffic counts, and that DeKalb County has 400 miles of roads that need re-paving.  The condition of the roads isn't the only thing that affects traffic counts, of course, but...surely that's a place to start?  Blight, artificially depressed property values, infrastructure...the shape of the problem seems to be the same in many parts of the county.  I'm surely biased, but I haven't heard a lot of concrete ideas about how to solve it except from one person. Ask him.

Meanwhile, if you live elsewhere in the Atlanta area, check out Arabia Mountain.  It's pretty there.