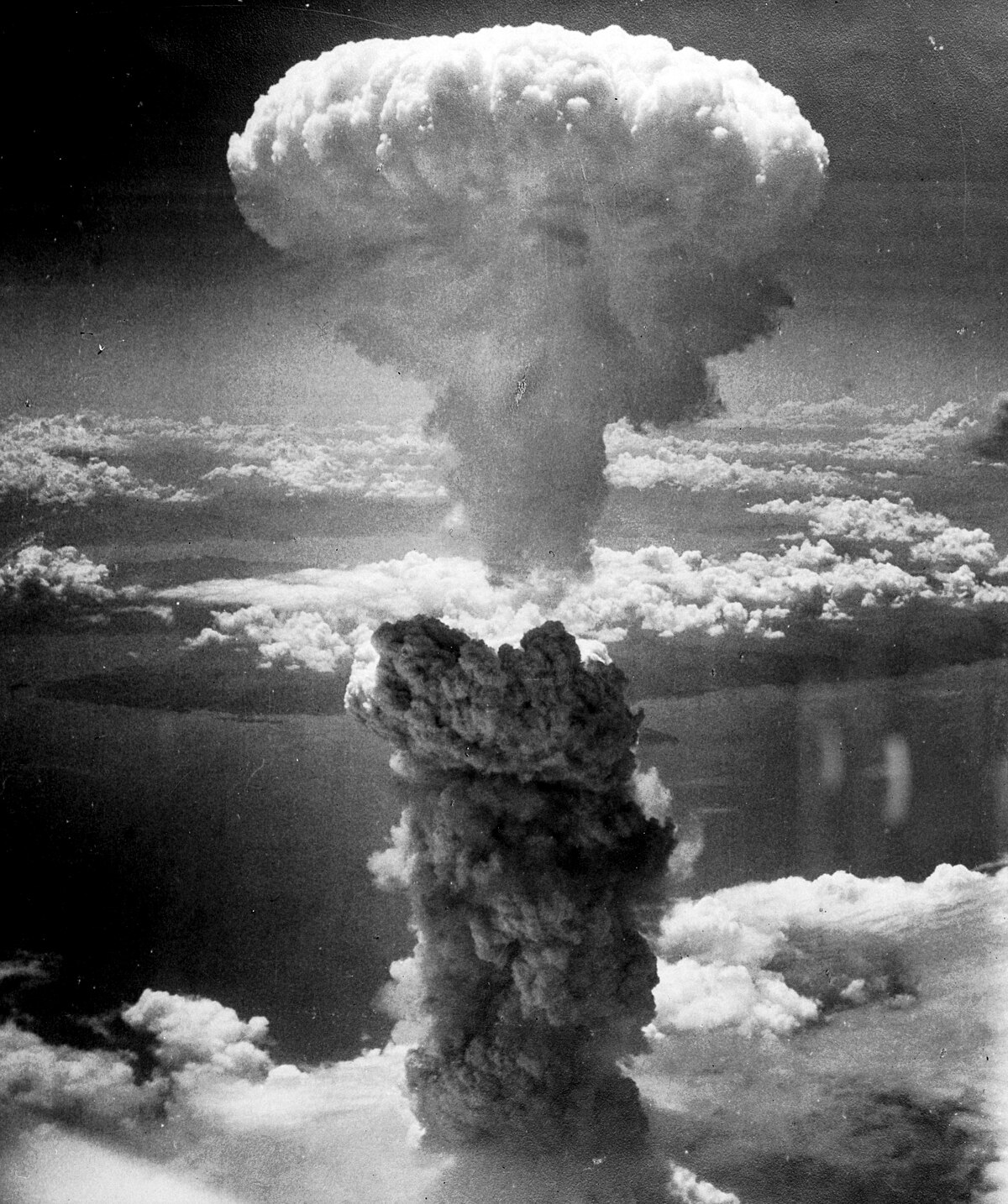 By Charles Levy from one of the B-29 Superfortresses used in the attack. - http://www.archives.gov/research/military/ww2/photos/images/ww2-163.jpg National Archives image (208-N-43888), Public Domain, Link

The above photo is from the attack on Nagasaki, one of only two nuclear weapons that have ever been used in war, both of course by the United States. Like most people alive today, I grew up under the shadow of that decision, and the constant threat of all-out nuclear war.  It has shaped our policies and decisions for the last seventy-one years.  It especially dictates our relationship with China, our relationship with Russia...basically, all of the things you've decided to shake up.

In the summer of 1945, President Harry Truman made these observations:

We have discovered the most terrible bomb in the history of the world. It may be the fire destruction prophesied in the Euphrates Valley era, after Noah and his fabulous ark. Anyway, we think we have found the way to cause a disintegration of the atom. An experiment in the New Mexico desert was startling -- to put it mildly. Thirteen pounds of the explosive caused a crater six hundred feet deep and twelve hundred feet in diameter, knocked over a steel tower a half mile away, and knocked men down ten thousand yards away. The explosion was visible for more than two hundred miles and audible for forty miles and more. This weapon is to be used against Japan between now and August 10.

The thought process in that paragraph is peculiar.  He predicts apocalypse from this weapon, then casually states the intention to use it.  He also declares a stipulation to aim at "military objectives and soldiers and sailors... not women and children" even though the impossibility of making that distinction with a city-destroying weapon should have been clear, was certainly clear. You can see him justifying it to himself by describing the "Japs" as "savages, ruthless, merciless and fanatic"...the same language, more or less, used to justify the internment camps.  A note for you and your spokes-people:  Sane and moral persons generally view the internment of Japanese-Americans as a blot on our nation's honor. Neither the first not the last to be sure, but definitely not something to ever be emulated.  Or mentioned favorably in an interview.

It's not quite an excuse, but it's possible that the people making the decision to use that weapon just weren't able to wrap their heads around how destructive it really was.  It's the difference between knowing a thing intellectually and knowing it in your gut.  I note in passing that "gut feelings" aren't that useful either when they are wrong.

In any case, now we do know how horrifying those weapons are, and have built many more terrible ones. But we also live in an era where you and others can observe the destruction of Aleppo with a dispassionate eye, and turn away the refugees pouring out of Syria....because ISIS, I guess.  All those Muslims are savages, amirite?  "Ruthless, merciless, and fanatic."  Never mind any distinctions between, say, a weapon-toting actual terrorist and a child.  You have to confuse the distinction between aggressor and victim, because otherwise how can you convince everyone that a Syrian toddler is a security risk, but you playing chicken with the other nuclear powers is just fine? This relies on your audience being stupid or evil; people whose minds can encompass the destruction of a building because they saw it on television, but who can't imagine the destruction of an entire city; or else don't care because the city isn't their own.  Except, it could be, couldn't it?  That's what mutually assured destruction is about.

I'm neither stupid nor evil, and my imagination works just fine. So does my moral compass.

Truman was a strange man, perceptive and blind at the same time. Speaking of the destruction of Berlin, he had this to say:


What a pity that the human animal is not able to put his moral thinking into practice. We saw old men, old women, young women, children from tots to teens carrying packs, pushing carts, pulling carts, evidently ejected by the conquerors and carrying what they could of their belongings to nowhere in particular....I fear that machines are ahead of morals by some centuries and when morals catch up perhaps there'll be no reason for any of it.

I hope not. But we are only termites on a planet and maybe when we bore too deeply into the planet there'll be a reckoning. Who knows?

Sara Amis
Citizen of these United States of America

PLEASE JOIN ME IN WRITING THE ASSAILANT-IN-CHIEF
Please join me in bombarding the Assailant-in-Chief with letters: https://www.donaldjtrump.com/contact. I will write to him every day through his first 100 days in office, maybe longer if momentum holds. I am asking others to write just ONE letter. Let's not just vent our grief to each other--let's speak truth to power together. Please WRITE and please SHARE this plan with your friends. Pass it on!
You do not need to be a woman or an assault survivor to address the Assailant-in-Chief as such. If you are a man who has a daughter, a sister, a wife, a woman colleague or friend you respect, or a mother (hint: that last one is all of you!), then you have something to say to the Assailant-in-Chief. Your letter might be a brief one-liner. That's great! Please send it! Women need our allies now. Here's the link to DJT's contact page--this might take you one minute or less! https://www.donaldjtrump.com/contact
Or, maybe you will start a related project addressing any one of the many groups Trump has already harmed . . .
As we talk with each other, let's break the bubble and also send our complaints straight to the source. He won't read them and won't care if he does, so probably this is a placeholder action while we figure out what we're really going to do . . . but it's something.

PS from Sara:  I've taken to just tweeting these at him.  He's not going to read them anyway, but I might as well use the platform that he actually responds to.  *snort*
Posted by Sara Amis at 12:05 PM